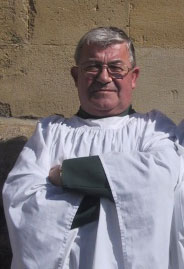 A large congregation gathered yesterday in Saint Andrew’s Church, Malahide to celebrate the life of our good friend Mervyn Percival. The small Church was filled to capacity with many braving the elements outside in order to pay their respects to his family, Margaret, Geoff, Roger, his Mother in Law Edie, his Brother Charles, and Daughter in Law Emma and his Grandchildren and extended family circle.

Mervyn’s love of music was acknowledged by many in the course of the service, and it was a fitting tribute that members of Saint Bartholomew’s Choir together with Saint Andrew’s Church Choir, The Strollers, and the Clef Club all gathered in his honour. Following the service Mervyn was laid to rest in the adjoining churchyard.

I have known Mervyn for many years, first meeting with him in the 1980’s when I joined Christchurch Cathedral Choir, Mervyn had only recently resigned from the Cathedral Choir at that stage to persue his business interests, and I literally, followed in his footsteps as a Cathedral chorister. Throughout my time in the Cathedral, I would meet Mervyn following board meetings, and at all the major services.

Although, I had met Mervyn on many occasions in the 1980’s it was not until the summer of 1995 when our friendship was to develop, when I joined Saint Bartholomew’s Choir. Over the past 12 years, I have enjoyed his company, both in the choir and socially, and am saddened by his passing. He was a true gentleman in every sense of the word, generous, and very fair in all his dealings, and although he is no longer with us in the flesh, his spirit will live on in our hearts for many years.

May he rest in peace.