A beautiful summer’s evening in early July saw Saint Bartholomew’s hosting an exciting and unusual concert. Bathed in light by the setting sun, the church was transformed into a rustic glade for the Irish premiere of the first-ever Spanish opera, Celos aun del aire matan, which was written in around 1660. A packed audience witnessed a colourful and lively performance given by students from the University of Sheffield led by the world-renowned early music expert Andrew Lawrence-King. This was a very different event from anything which has taken place at Saint Bartholomew’s in recent history, and the church was honoured indeed to be able to welcome such distinguished guests! Their visit clearly roused people’s curiosity, as the church was packed! Lawrence-King’s is a familiar name here in Ireland, thanks to his previous visits to the country and his lengthy and distinguished discography, and he led a performance of characteristic energy and inspired musicality. We were left in awe at the young singers’ mastery of seventeenth-century Spanish, and at the dexterity of Lawrence-King at his harp! The language barrier was easily surmounted thanks to a detailed synopsis of the (rather complicated) plot in the programme and an English-language narration by the character Calderon, the playwright himself. The church’s acoustic was perfect for the forces involved: it added warmth and resonance without being overwhelming. The words were crystal clear even from the very back of the church! The atmosphere was added to by the playing of Spanish guitar music as the audience took their seats and by the simple but effective decoration of the church with foliage and candles. The performance was featured on RTE Lyric FM and glowingly reviewed by the Irish Times, amongst others. It is hoped that this will be just the first of many such interesting and diverse productions at Saint Bartholomew’s in the months and years to come, and that future events will continue to delight and inspire those who choose to attend them! 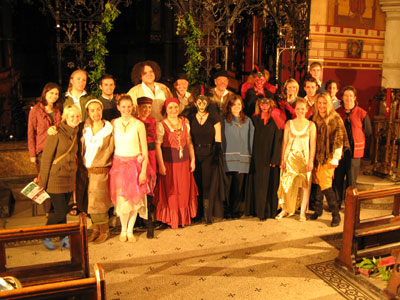