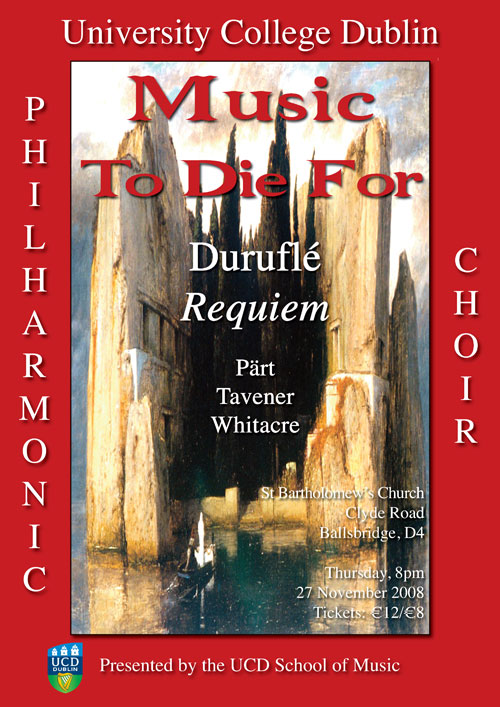 The third concert of the UCD Philharmonic Choir presented by the UCD School of Music will take place at Saint Bartholomew’s this coming Thursday. Under the direction of Thomas Kehoe, the Choir will perform Duruflé’s Requiem together with music by Tavener, Pärt and Whitacre. The programme offers us a revealing view of four composers’ varied responses to texts on the theme of death. Duruflé’s Requiem is one of the best-known and most popular works of the twentieth century. It is by turns gentle and disturbing, passionate and becalmed – a beautiful and ultimately uplifiting response to the text of the Requiem Mass. The Requiem shares the programme with works by three prominent contemporary composers: the American Eric Whitacre (Sleep), Arvo Pärt (The Beatitudes) and Sir John Tavener (Song for Athene, made famous by its performance at the funeral of Diana, Princess of Wales, and Funeral ikos). The Philharmonic Choir is a new initiative undertaken by the UCD School of Music, offering staff and students an opportunity to explore the rich cultural heritage of the choral repertory. The choir gathers its members from across the entire UCD Community in weekly rehearsals during the academic year. The Choir are delighted to be staging this performance in the beautiful setting of Saint Bartholomew’s and hope that many will come on the eve of the season of Advent to reflect on the powerful themes of death, hope and light that are relevant to us all. The performance begins at 8.00pm on Thursday 27 November. Tickets (€12 / €8) will be available on the door. Further information can be found here.