David Grealy, a native of Galway city, is a first-class honours music and history graduate of NUI Maynooth, where he studied organ performance under Professor Gerard Gillen. He is currently organist in residence at Westminster Cathedral, having been organ scholar there in 2008-9. His duties include accompanying the renowned Cathedral Choir and giving regular organ recitals at the Cathedral. From 2006 to 2008 he was organ scholar at Saint Mary’s Pro-Cathedral in Dublin, and was also assistant director to the choirs in 2009-10. His duties in the Pro-Cathedral included working closely with the Palestrina Choir, for whom he was organist on its tours to the UK in 2007 and 2009, Germany in 2008, and the USA in 2010. Prior to this he held the organ scholarship at Galway Cathedral for three years, where he featured on a number of occasions in the Cathedral’s recital series. David is also in regular demand as an accompanist. He has featured regularly on RTÉ broadcasts, including The Late Late Show in April 2008, and broadcast Easter and Christmas liturgies in 2007. He has also won numerous prizes for organ including the Stanford Prize in 2003 and the advanced organ prize in 2005 at the Dublin Feis Ceoil. 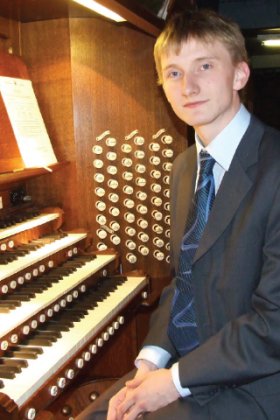