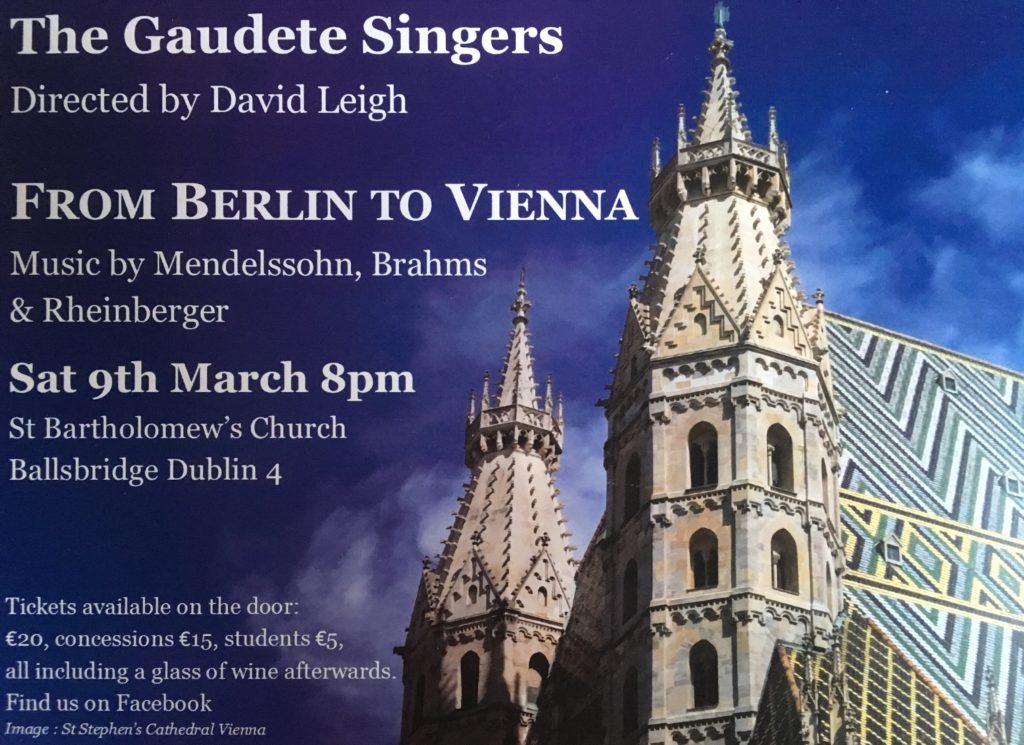 The Gaudete Singers return to Saint Bartholomew’s this Saturday for a concert of beautiful nineteenth century Romantic sounds from the German and Austrian traditions.

Tickets on the door: €20; concession €15; students €5 with ID, all including a glass of wine or soft drink afterwards. 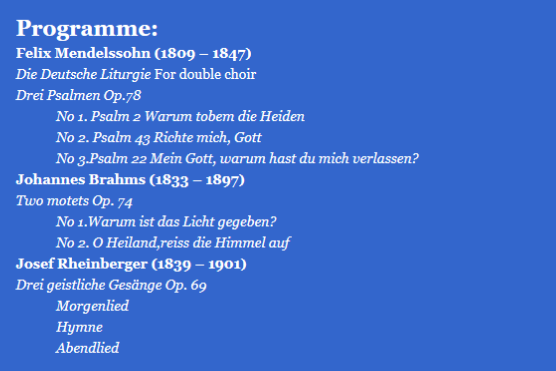 Mendelssohn is often considered the greatest child prodigy after Mozart. He began taking piano lessons from his mother when he was six years old.  At age eight, he studied composition with Carl Friedrich Zelter in Berlin and probably made his first public concert appearance at the age of nine. He was also a prolific composer as a child, and wrote his first published work, a piano quartet, by the time he was 13.

“His exposure to Bach led to a fondness for learned counterpoint as well as to his conducting the St. Matthew Passion in 1829 – an immensely influential performance that took Bach out of the exclusive hands of specialists and into a more general public consciousness. He began to perform throughout Europe as a conductor and as a pianist to great success. In 1829, he made his first trip to England where his composing and playing found a rapturous audience. Indeed, one can say that Mendelssohn dominated English music in the 19th century as completely as Handel had done in the 18th.” —Steven Schwartz

The influence of Bach can be heard in the two works in this concert that were written near the end of his short life. The Drei Psalmen were composed in 1843/4 and Die Deutsche Liturgie in 1846. Both works were composed for church services in Berlin Cathedral using a simpler style of church music for the new order of worship in Prussia.

Brahms was also influenced by Bach and the Two Motets were published in 1878 with a dedication to the great Bach scholar, Philipp Spitta.

Warum ist das Licht gegeben? was composed during the summer of 1877, at a time when the composer was putting the finishing touches to his Second Symphony. The first performance was given in Vienna on 8 December 1878.  O Heiland, reiss die Himmel auf, in four parts, was composed earlier, between 1863 and 1864.

Rheinberger is probably the least known of the three composers and his Abendlied is likely the best known piece performed in this concert. Rheinberger was also something of a prodigy and began playing the organ and composing at the age of seven.  At 12, he was admitted to the Academy of Music in Munich where he studied with Franz Lachner, a close friend of Franz Schubert, and by the age of 15 he was gainfully employed as an organist.  He spent 33 years as professor of counterpoint and organ at the Royal School of Music in Munich where the Drei geistliche Gesänge were composed in 1855.

We hope to see you this Saturday, and please join us for a glass of wine after the concert (included in the ticket price).