We are delighted to host the chamber choir from King’s College School in Wimbledon for a concert on Wednesday, 23 October at 7.30pm.  Conducted by Daniel Phillips and accompanied by organist Will Ford, the 45 singers of the boys’ choir will perform a set of both sacred and secular pieces.  Admission is free, so come early to nab a good seat! 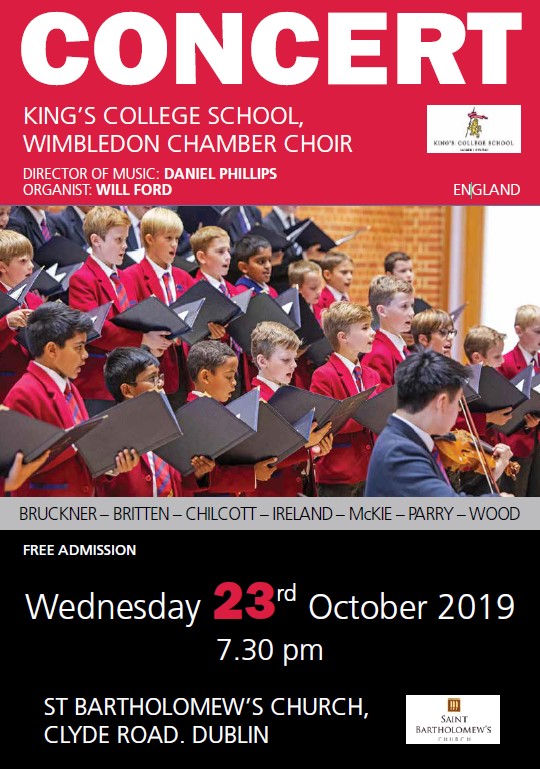 King’s College School was founded in 1829 as the junior department of King’s College and moved to its present site on Wimbledon Common in 1897.  In 1912, King’s College Junior School was opened.  Today, the two schools educate some 1400 pupils.  Music was well established at King’s in the 1920s and has flourished in recent years. The school boasts a particularly strong choral tradition.

The trebles of the chamber choir are all pupils at King’s College Junior School; the altos, tenors, and basses are drawn from the senior school. Currently, there are about 45 boys in the choir. The chamber choir has won a reputation for itself in London and has performed on tour both in the UK and abroad.  In recent years, their travels have taken them to sing in the Duomo in Florence, St. Mark’s Basilica in Venice, Notre-Dame in Paris, and St. Stephen’s Cathedral in Vienna.

Back at home in the UK, the choir regularly sings Evensong in the cathedrals of St. Paul’s, Winchester, Chichester, Salisbury, Guildford, and Southwark; as well as in St. George’s Chapel at Windsor Castle and Hampton Court Palace.  The past few years have also seen the choir perform in Tewkesbury Abbey, St. John’s Smith Square, Cadogan Hall, and the Royal College of Music.

In addition to a number of carol services each year, the choir performs a popular Christmas concert at St. James’s Church in Piccadilly. Together with the King’s Choral Society, they have also taken part in joint performances of Handel’s Messiah, Duruflé’s Requiem, Britten’s St Nicolas, and Mozart’s Requiem.

The choir records regularly: its most recent CD, Light above light, was released in 2018 to great acclaim and, this November, the trebles will be taking part in the highly prestigious Wimbledon International Music Festival.