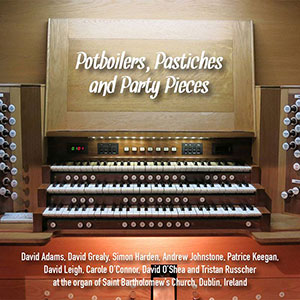 To those who would never accept a present of recorded organ music, let alone purchase any themselves; to those for whom the word ‘toccata’ is synonymous with Bach and Widor alone; to those for whom the term ‘chorale prelude’ conjures up only the obscurities of some unknown alien hymn-tune, and for whom fugues are pieces during which the parts come in one after another and the audience go out one after another — in short, to those who, through no fault of their own, are under the false impression that the King of Instruments must forever stand on stiff-upper-lipped royal ceremony, this collection of potboilers, pastiches and party pieces is unashamedly offered, without apology, but with the following few words of explanation.

It can hardly have been intentional that the theme tune of a popular 1980s BBC TV puppet show traced the portentous melodic outline of the Gregorian chant ‘Te Deum laudamus’. The resemblance, however, has not been lost on those British organists who remember the show from their infant school days. Though at first confined to the realm of improvisation (where it proved useful especially at baptisms), in 1996 the seven-note theme made a triumphantly French-flavoured entry into the field of organ literature in the shape of Edward Marsh’s arresting Toccata sur ‘Pat le facteur’, subtitled (by way of a reminder to aficionados of the puppet show) La vallée verte. As a parody of French manners, this item would have all the ingredients of an Inspector Clouseau farce were it not that Marsh’s suave foreign accent sounds too much like the real thing.

Similarly unimaginable without its French antecedents is the rambunctious organ suite Fiesta! (2003) by versatile virtuoso Iain Farrington, another British francophile, yet one of jazzier persuasions. While the three movements recorded here recall the innovative language of such luminaries as Alain and Messiaen, the content is wholly original: this music speaks entirely for itself.

‘Pat le facteur’ belongs to that class of toccatas in which glittering finger-work forms a counterpoint to menacingly melodic foot-work, a class exemplified for all time by the trepidatious finale of Suite gothique (1895) by the Alsace-born composer and Parisian organist Léon Boëllmann. Belonging to a contrasting class, in which manual dexterity takes centre-stage and the cantabile element is confined to a calmer central section, is the no-less-celebrated Toccata (1889) by Boëllmann’s longer-lived compatriot and contemporary Théodore Dubois. The character of this work, in which the pedals are relegated to a supporting role, is explained by its inclusion in a collection inscribed ‘for organ or pedal piano’, the latter cumbersome instrument being a relic of the days when organists may not have been wealthy enough to pay the salaries of full-time organ-blowers but could still afford to live in houses with capacious drawing rooms. Another domestic substitute for the organ was the harmonium, invented, legend has it, by an instrument maker curious to know what a piano would sound like if it could catch a dose of the flu. So dearly did French organists take this wheezing contraption to heart that many of them composed especially for it, the trail being blazed by that notorious fairground man of the organ world, Louis James Alfred Lefébure-Wély, whose Boléro de Concert makes a not entirely authorised transfer from salon to sanctuary on this recording.

Whereas the theory and criticism of church music has for centuries resounded with pious pronouncements against the mixing of sacred and profane, the contrary view—that the Almighty might actually be subverting the follies of man to His own greater glory—has been articulated almost entirely in the practical sphere, from Renaissance burlesques of unmentionable madrigals to Viennese masses fit (some would say fit only) for the opera house. In continuance of that gloriously suspect tradition, the music on this CD conveys within the hallowed walls of Saint Bartholomew’s Church a range of diverse extra-mural references from such widely separated worlds as fine art and gaming technology. The scintillating scherzo Sportive Fauns — published in the USA in 1922 by Hungarian organ virtuoso Dezso d’Antalffy, and dedicated to his friend and French counterpart Marcel Dupré—claims inspiration from the mythical half-men-half-goats that strut their stuff in some of the more risqué works of the Swiss symbolist painter Arnold Böcklin (1827–1901). By way of complete contrast, and in defiance of the old adage that new wine can’t be put in old bottles, Jonathan Mui’s craftily contrapuntal Flight of the Angry Birds (2011) drags the mundane melody of hand-held digital divertissements kicking and screaming into the eighteenth century.

Bringing things back home, as it were, Planxty Connolly (2008) forms Dublin organist David Adams’s own keen-eared tribute to Ireland’s national instrument, the uilleann pipes, spicily disrupted with a dash of post-modern mayhem and dedicated to his Dún Laoghaire–based colleague David Connolly. Riverdance, as no one who heard its première will ever forget, began life as an interval segment for the RTÉ-hosted final of the Eurovision Song Contest in 1994, when Ireland scored the third of four wins in five years. The segment itself proved that year’s de facto winner, however, quickly spawning an international hit dance show, myriad interpretations by Irish traditional musicians, the organ solo version recorded here, and everlasting renown for its composer Bill Whelan. Perhaps also springing from Irish soil, albeit much less notoriously, is the Tuba Tune published in 1922 by Norman Cocker, then an organist-to-be of Manchester Cathedral in the north west of England. Though this jolly work’s genesis has yet to be documented, the dedication to Dr William George Eveleigh (1868–1950), then organist of Saint Fin Barre’s Cathedral, Cork, suggests that the composer, while stationed locally during WW1, may have penned the work for that cathedral’s organ and its famously fiery tuba stop.

The life-span of Carl Severinus Hansstein—whose birth took place in 1769, some seventy-two years after his death in 1697—remains a stumbling-block for necromusicologists, the only plausible hypothesis being that, like his legendary teacher and long-time drinking associate P. D. Q. Bach, Hansstein lived life in reverse. Certainly the chronology is not helped by the fact that some of the organ preludes recorded here are based on melodies that are not otherwise known to have existed prior to the nineteenth century. Though the sole surviving manuscript source (the property of a private individual who wishes to remain private) contains no clues as to the melodies’ identification, scholars have categorically established that the Kinderliederorgelbüchlein contains references to ‘The Grand Old Duke of York’, ‘Hickory dickory dock’, ‘Oranges and lemons’, ‘Old King Cole’, ‘I had a little nut tree’, ‘Rock-a-bye baby’ and ‘Humpty-Dumpty sat on a wall’. When asked how these nursery songs could have been known to the likes of a Hansstein, however, such scholars will prefer to sit on a fence.