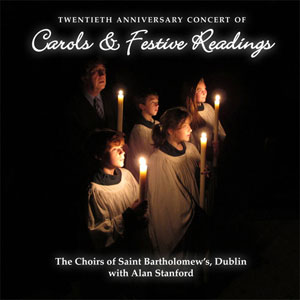 The Choirs of Saint Bartholomew’s, Dublin
with readings by Alan Stanford

Every Christmas the boys, girls and men of Saint Bartholomew’s Choirs join with Alan Stanford to give a concert of festive music and readings, an occasion which has become for many an essential part of the season. This special recording has been produced to celebrate the twentieth anniversary concert which took place on 13 December 2009. Proceeds will go directly towards furthering the development of the increasingly ambitious programme of music within the church.