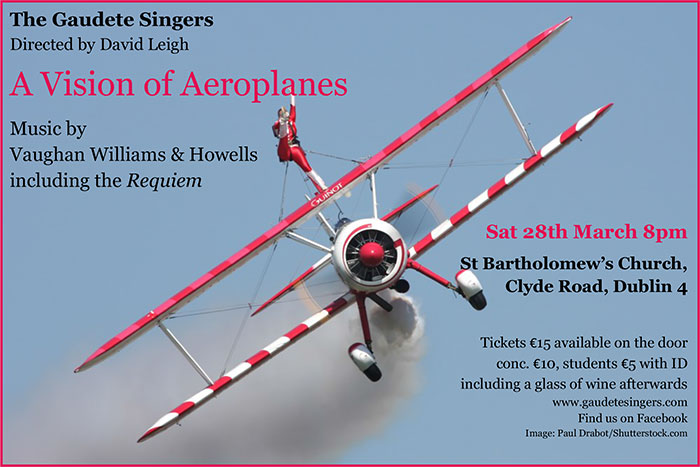 Two contrasting works form the centrepiece of this concert. A Vision of Aeroplanes by Vaughan Williams is unlike any other work by this great English composer. Written in 1956 to a setting of Ezekiel Ch 1, where the prophet describes “…. those were lifted up from the earth” that Vaughan Williams has interpreted as a description of an aeroplane. It is a whirlwind of musical imagery for both choir and organ that is rarely performed.

Howells Requiem was composed in 1936 after the death of his son, Michael, but it was not released for publication until 1980. It a deeply personal expression of loss and many of the musical ideas were expanded and reworked into the Hymnus Paradisi for much larger forces. This work, however is an intimate expression of grief, set to mainly English texts including Psalms 23 and 121.

So please come along for this rare musical treat on 28th March and join us for a glass of wine after the concert (included in the ticket price).

A Vision of Aeroplanes

One thing have I desired