Saint Bartholomew’s Church maintains a liturgical tradition that is broadly related to that of the Anglo-Catholic tradition. Anglo-Catholicism distinguishes that section or party of the Anglican Communion which stems from the Tractarian Movement of the 1830’s. (This movement was centred in Oxford and included such influential figures as John Henry Newman, one of the prime movers in the founding of University College Dublin.) Anglo-Catholics hold a ‘high’ doctrine of the Church and the sacraments; they attach great importance to the apostolic succession, that is, to an episcopal order derived from the apostles; to the historical continuity of the existing Church with the Church of the earliest centuries; and to the Church’s ultimate independence of the State. 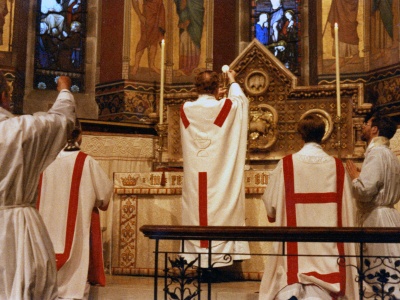 The original Oxford Tractarians were concerned with the basic doctrine of the Church. They revived religious communities and various practices of personal discipline (such as fasting and confession to a priest), largely based on current Roman Catholic models. They were not much concerned with liturgical ritual and ceremonial. But as the movement progressed and moved into the parishes, Anglo-Catholics cultivated a more ‘catholic’ liturgical style that caused them in some quarters to be regarded as preoccupied with the externals of worship. They were disparagingly called ‘ritualists’. Public disturbances at Anglo-Catholic services occurred and legal actions were taken against the Anglo-Catholics in both the ecclesiastical and the civil courts. Nevertheless, despite the initial opposition of nearly all the bishops, and a parliamentary attempt to control public worship, many of the practices originally regarded as Anglo-Catholic (such as the use of candles or the wearing of stoles by the sacred ministers) gradually spread throughout the Anglican Communion, and are today no longer regarded as ‘ritualist’ by the greater majority. The increased frequency of celebrations of the Eucharist owed much to Anglo-Catholic influence.

In its early days, Anglo-Catholicism was conservative both theologically and politically, but in the latter part of the 19th century a division arose between those who sought to liberalize its theology by accepting the results of biblical criticism and those who resisted all concessions to modernity. At the same time, some Anglo-Catholics became active in promoting more or less radical and socialist organizations. These divisions continued into the 20th century. The Anglo-Catholic movement seemed to reach its height after the First World War when five spectacular Anglo-Catholic congresses were held in London and elsewhere between 1920 and 1933. There were hopes that the whole Anglican Communion, already influenced in many ways by the diffusion of Anglo-Catholic ideals, might be converted. Since the 1930’s, Anglo-Catholics have been less conspicuous as an organized and identifiable party, though the movement continues to have adherents and shows periodic signs of revival, as for example in the Catholic Renewal Conferences, held in Loughborough in 1978 and 1983. In 1990, ‘Affirming Catholicism’ was founded to provide a forum for the discussion of issues raised by the tension between scholarship and free enquiry on the one hand, and the Catholic tradition within Anglicanism on the other.

Anglo-Catholic ideals continue to fertilize the Church. These are the ideals which Saint Bartholomew’s Church has traditionally sought to acknowledge. They are outwardly signalled in the church’s choices in its liturgical style.