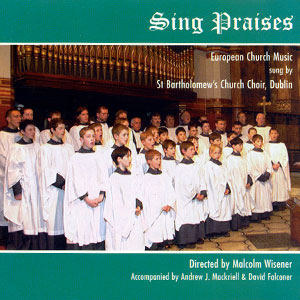 The choir’s first CD was launched at the Hugh Lane Gallery on Thursday, November 5th, 1998 by Alexander Anissimov, the conductor of the RTE Symphony Orchestra. It was recorded prior to the foundation of the girls’ choir, and thus features the boys and men only.

The psalms have always been sung to plainsong at Saint Bartholomew’s, as is the common practice in churches of the Catholic Revival in Anglicanism. Initially, Hebmore’s Plainsong Psalter was used, but since 1940 the Vale Psalter has taken its place. The Psalter, which uses the more elaborate Solesmes tones, was the work of Walter Vale, organist of All Saints, Margaret Street, London. He personally presented it to Saint Bartholomew’s.

Wesley was one of the most influential figures in the revival of cathedral music in the nineteenth century. This piece is typical of his large-scale anthems which consist of several movements. His music is always very melodic and he was one of the first composers since the seventeenth century to write independent organ parts for his choral music. Before that time the organ had tended merely to double the voice parts.

This well-known hymn, set to music by William Maher, is popular at Saint Bartholomew’s. The words are a translation of the fourteenth-century Latin hymn Anima Christi.

This is a movement from Bach’s cantata 147, Herz und Mund und That und Leben. It was popularised in an arrangement by Sir Hugh Allen at the beginning of the twentieth century.

Although principally remembered as a cellist, Casals was also an active composer. This dramatic piece, whose words, the improperia or reproaches, derive from the liturgy of Good Friday, probably dates to 1932. It was originally written for tenor and bass voices, and composed for the Benedictine monks of Montserrat. Casals later recast it for SAATB.

Gibbons wrote this verse anthem for an alto solo with an SAATB chorus. It was originally sung to viol accompaniment.

Franck was titulaire organist at Sainte-Clothilde, Paris. His Panis Angelicus is said to have begun life as an organ improvisation that Franck played at a Christmas service at Sainte-Clothilde in 1861. The original scoring of this piece, which is a movement from his Messe à trois voix, was for a tenor solo, with organ, harp, cello and double bass. The words are from Thomas Aquinas’ Corpus Christi hymn Sacris Solemnis.

Perhaps the most familiar of Palaestrina’s motets, Sicut Cervus is a model of Renaissance polyphony. It is a setting of Psalm 41:2 (Vulgate version), Sicut cervus desiderat at fontes aquarum, ita desiderat anima mea ad te, Deus (“Like as the hart desireth the water brooks, so longeth my soul after thee, O God”). This Psalm formed part of the Tract used at the blessing of the font on Holy Saturday.

Bruckner composed his Ave Maria in 1861 while organist of Linz Cathedral. He wrote three settings of this text. The rich harmonies of the piece are characteristic of those found later in his symphonies.

Fauré composed his prize-winning Cantique in 1865, the year in which the foundation stone of Saint Bartholomew’s Church was laid. Fauré became organist of La Madeleine, Paris. His text derives from Racine’s Hymnes traduites du bréviaire romain.

Lotti, a master of elegant counterpoint, lived and worked most of his life in Venice, where he was appointed to the coveted position of maestro di cappella at San Marco in 1736. This motet is part of a Credo written during a period spent at court in Dresden between 1717 and 1719.

Wood was born in Armagh in 1866, where his father was a Lay Vicar at the cathedral. He studied at the Royal College of Music and in 1924 succeeded Charles Villiers Stanford as Professor of Music in the University of Cambridge. He is chiefly remembered today for his church music. This anthem is a typical example of his style and work.

The tune of this hymn, called “Saint Bartholomew”, was composed by W. Vipond Barry, organist of Saint Bartholomew’s between 1884 and 1938. Barry inaugurated the church’s musical tradition.

Stanford was born in Dublin in 1852. For forty years he was Professor of Music in the University of Cambridge. He composed prolifically, and set a new standard in Anglican church music. His Service in A, whose Nunc Dimittis is heard here, was originally written with an orchestral accompaniment.